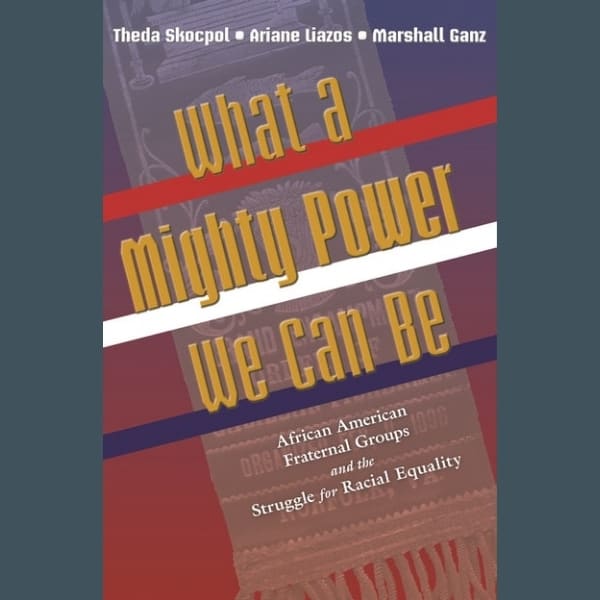 What a Mighty Power We Can Be: African American Fraternal Groups and the Struggle for Racial Equality (Book)

A book about the African American brotherhoods and sisterhoods that provided aid to members, enacted group rituals and engaged in community service.

“From the nineteenth through the mid-twentieth centuries, millions of American men and women participated in fraternal associations — self-selecting brotherhoods and sisterhoods that provided aid to members, enacted group rituals, and engaged in community service. Even more than whites did, African Americans embraced this type of association; indeed, fraternal lodges rivaled churches as centers of black community life in cities, towns, and rural areas alike. Using an unprecedented variety of secondary and primary sources — including old documents, pictures, and ribbon-badges found in eBay auctions — this book tells the story of the most visible African American fraternal associations.

The authors demonstrate how African American fraternal groups played key roles in the struggle for civil rights and racial integration. Between the 1890s and the 1930s, white legislatures passed laws to outlaw the use of important fraternal names and symbols by blacks. But blacks successfully fought back. Employing lawyers who in some cases went on to work for the NAACP, black fraternalists took their cases all the way to the Supreme Court, which eventually ruled in their favor. At the height of the modern Civil Rights movement in the 1950s and 1960s, they marched on Washington and supported the lawsuits through lobbying and demonstrations that finally led to legal equality. This unique book reveals a little-known chapter in the story of civic democracy and racial equality in America”. – Publisher’s website