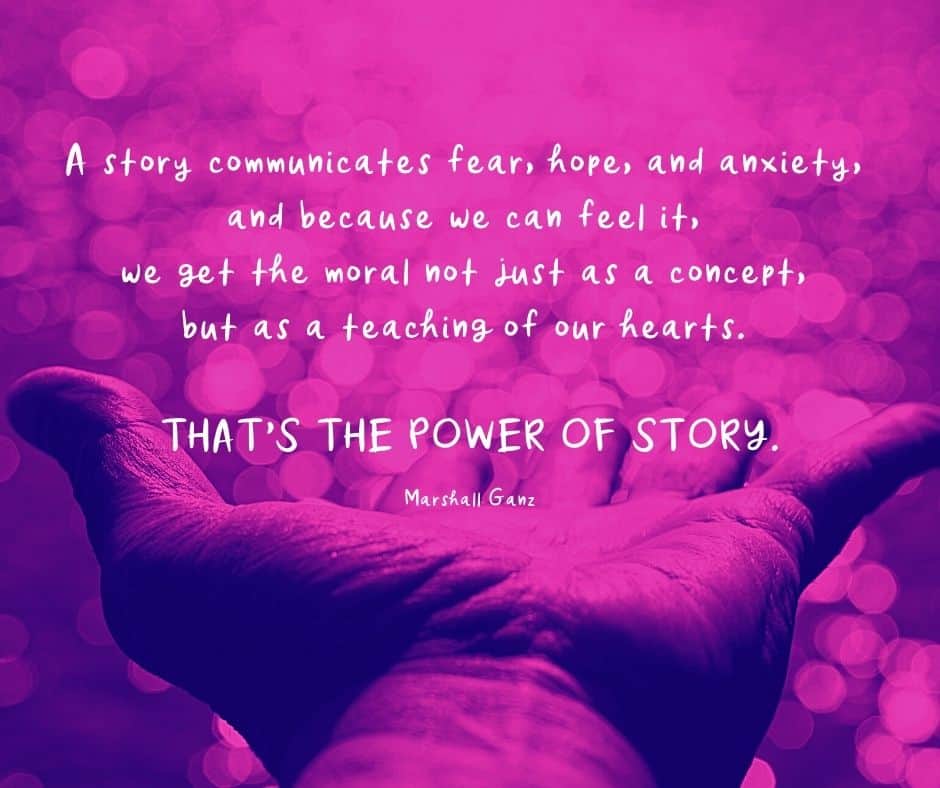 Why Stories Matter: The Art and Craft of Social Change

Marshall Ganz explains why stories are necessary for organizing and creating social change.

I grew up in Bakersfield, California, where my father was a rabbi and my mother was a teacher. I went to Harvard in 1960, in part because it was about as far as I could get from Bakersfield, which was the terminus of the dust bowl migration that John Steinbeck made famous in The Grapes of Wrath.

I got my real education, however, when I left Harvard to work in the civil rights movement in Mississippi. I went to Mississippi because, among other things, my father had served as an Army chaplain in Germany right after World War II. His work was with Holocaust survivors, and as a child the Holocaust became a reality in our home. The Holocaust was interpreted to me as a consequence of racism, that racism is an evil, that racism kills. I made a choice to go to Mississippi.

I also was raised on years of Passover Seders. There’s a part in the Passover Seder when they point to the kids and say, “You were a slave in Egypt.” I finally realized the point was to recognize that we were all slaves in Egypt and in our time that same struggle from slavery to freedom is always going on, that you have to choose where you stand in that. The civil rights movement was clearly about that struggle. It was in Mississippi that I learned to be an organizer and about movement-building.

The initial challenge for an organizer—or anybody who’s going to provide leadership for change—is to figure out how to break through the inertia of habit to get people to pay attention. Often that breakthrough happens by urgency of need. Sometimes it happens because of anger—and by anger I don’t mean rage, I mean outrage. It’s the contradiction between the world as it is and the world as it ought to be. Our experience of that tension can break through the inertia and apathy of things as they always are.

How do organizers master urgency to break through inertia? The difference in how individuals respond to urgency or anxiety (detected by the brain’s surveillance system) depends on the brain’s dispositional system, the second system in the brain, which runs from enthusiasm to depression, from hope to despair. When anxiety hits and you’re down in despair, then fear hits. You withdraw or strike out, neither of which helps to deal with the problem. But if you’re up in hope or enthusiasm, you’re more likely to ask questions and learn what you need to learn to deal with the unexpected.

Hope is not only audacious, it is substantial. Hope is what allows us to deal with problems creatively.

In order to deal with fear, we have to mobilize hope. Hope is one of the most precious gifts we can give each other and the people we work with to make change.

The way we talk about this is not just to go up to someone and say, “Be hopeful.” We don’t just talk about hope and other values in abstractions. We talk about them in the language of stories because stories are what enable us to communicate these values to one another.
All stories have three parts: a plot, a protagonist, and a moral. What makes a plot a plot? What gets you interested? Tension. An anomaly. The unexpected. The uncertain and the unknown. A plot begins when the unknown intervenes. We all lean forward because we are familiar with the experience of having to confront the unknown and to make choices. Those moments are the moments in which we are most fully human, because those are the moments in which we have the most choice. While they are exhilarating moments, they are also scary moments because we might make the wrong choice.

We are all infinitely curious in learning how to be agents of change, how to be people who make good choices under circumstances that are unexpected and unknown to us. In a story, a challenge presents itself to the protagonist who then has a choice, and an outcome occurs. The outcome teaches a moral, but because the protagonist is a humanlike character, we are able to identify empathetically, and therefore we are able to feel, not just understand, what is going on.

A story communicates fear, hope, and anxiety, and because we can feel it, we get the moral not just as a concept, but as a teaching of our hearts. That’s the power of story.

That’s why most of our faith traditions interpret themselves as stories, because they are teaching our hearts how to live as choiceful human beings capable of embracing hope over fear, self-worth and self-love over self-doubt, and love over isolation and alienation.
How do we recapture that power of public narrative and learn the art of leadership storytelling?

A leadership story is first a story of self, a story of why I’ve been called. Some people say, “I don’t want to talk about myself,” but if you don’t interpret to others your calling and your reason for doing what you’re doing, do you think it will just stay uninterpreted? No. Other people will interpret it for you. You don’t have any choice if you want to be a leader. You have to claim authorship of your story and learn to tell it to others so they can understand the values that move you to act, because it might move them to act as well.
We all have a story of self. What’s utterly unique about each of us is not the categories we belong to; what’s utterly unique to us is our own journey of learning to be a full human being, a faithful person. And those journeys are never easy. They have their challenges, their obstacles, their crises. We learn to overcome them, and because of that we have lessons to teach. In a sense, all of us walk around with a text from which to teach, the text of our own lives.

The second story is the story of us. That’s an answer to the question, Why are we called? What experiences and values do we share as a community that call us to what we are called to? What is it about our experience of faith, public life, the pain of the world, and the hopefulness of the world? It’s putting what we share into words. We’ve all been in places where people have worked together for years, but there’s no us there because they don’t share their stories. Faith traditions are grand stories of us. They teach how to be an us.

Finally, there’s the story of now—the fierce urgency of now.

The story of now is realizing, after the sharing of values and aspirations, that the world out there is not as it ought to be. Instead, it is as it is. And that is a challenge to us. We need to appreciate the challenge and the conflict between the values by which we wish the world lived and the values by which it actually does. The difference between those two creates tension. It forces upon us consideration of a choice. What do we do about that? We’re called to answer that question in a spirit of hope.
Our goal is to meet this challenge, to seize this hope, and turn it into concrete action. After developing our stories of self, then we work on building relationships, which forms the story of us. From there we turn to strategizing and action, working together to achieve a common purpose, learning to experience hope—that’s the story of now

I learned important lessons in Mississippi that underlie the art and work of organizing. All the inequalities between blacks and whites were driven by a deeper inequality—the inequality of power. Paul Tillich taught us that the work of justice requires power, and for power to become justice requires love. All three are intimately related.

We cannot turn our love into justice without engaging power. Justice is not achieved without struggle. It’s not achieved without mobilizing power. Organizing is about mobilizing power.
The Montgomery bus boycott in 1955 and 1956 was an example of turning individual resources into collective power. To resist the segregated buses, the black bus riders refused to pay the fare to the bus company, and they refused not as individuals but as a community. By withdrawing that financial resource from the city of Montgomery, they turned an individual resource into collective power.

Gandhi taught us that most systems of power are based on interdependence and require some degree of cooperation between those who are exploited by them as well as those who benefit from them. Communities get organized because there are people among them who are skilled organizers, who are skilled leaders.

Leadership is about enabling others to achieve purpose in the face of uncertainty. When there’s certainty, when you know what to do, you don’t need leadership. It’s when you don’t know what to do that the art and creativity of leadership matters. It matters even more in enabling others to work together to achieve a common purpose in the face of uncertainty.

Marshall Ganz is a lecturer in public policy at the Kennedy School of Government, Harvard University. This article was adapted from his presentation at Sojourners’ Training for Change conference in June 2008. [Why Stories Matter. by Marshall Ganz. Sojourners Magazine, March 2009 (Vol. 38, No. 3, pp. 16). Cover.]