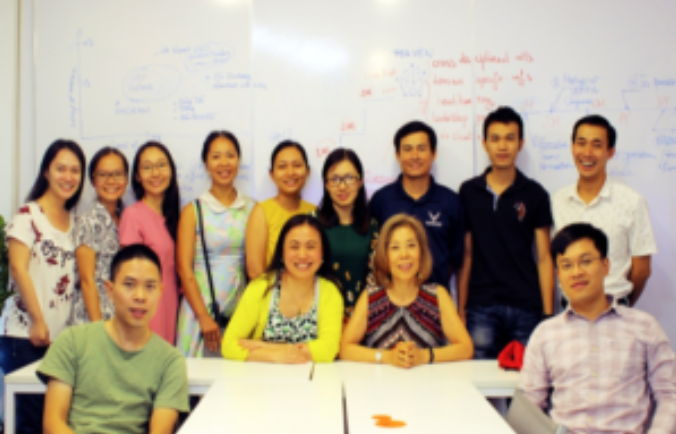 Why Public Narrative Works? Reflections from Sandy Dang on Narrative Training in Vietnam

Reflections on the effectiveness and impacts of public narrative training on fellows of the Vietnam Education Foundation.

The Vietnam Education Foundation (VEF) was established in 2000 by the U.S. Congress as an independent federal agency with a mission to strengthen bilateral relations between the United States and Vietnam through education exchange. Between 2003 and 2018, VEF awarded nearby 600 fellowships to Vietnamese nationals to pursue their graduate studies in Science, Technology, Engineering, Mathematics, and Medicine (STEMM) at leading universities in the United States. My involvement with VEF started in 2011 when I was appointed by President Obama to serve on the VEF Board of Directors, and then continued in 2014 when the VEF Board selected me to be its Executive Director.

Between 2011 and 2016, VEF Fellows often asked how they could motivate others to work on or donate to community projects to help Vietnam. Although VEF hosted an annual conference and provided workshops on leadership, grant writing, and publishing, VEF Fellows felt the time constraint made these workshops ineffective.

As a result, in January 2017 I decided to conduct a pilot two-day Public Narrative training with a group of seven VEF Fellows. My goal was to provide personal development to VEF Fellows since all of them are scientists, engineers, and public health professionals. They would benefit from learning a new toolset that would translate their research findings into a story to communicate with the public. At the time, I didn’t know how VEF Fellows would respond to this framework. From the beginning, I took the approach that they should serve as partners in the learning process and have a stake by paying a small fee to contribute to the project. 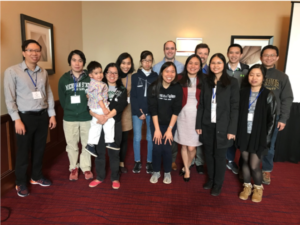 First of all, I would like to say thank you for the best training I have ever had in my life. For me, you encouraged me to feel better about this life, about what I am doing and about my future. – Quoc An Pham, Ph.D. Plant, Insect, and Microbial Sciences, VEF Fellow, University of Missouri at Columbia

Within a period of one year, VEF implemented the Public Narrative Project that provided training workshops to 120 Fellows and alumni in the United States and Vietnam. Because of this project, several VEF alumni have learned to become trainers and will start to teach Public Narrative workshops in Vietnam. In May 2018, they applied and then received a $20,000 grant from the U.S. Embassy in Hanoi to provide training for college students in Vietnam in 2019. To advance their knowledge and skills, these seven VEF alumni applied and two were accepted to enroll in the Harvard Kennedy School online course on Public Narrative and Organizing that is taught by Marshall Ganz, the founder of Public Narrative, in February 2019.

In addition, as a direct result of the training, a group of VEF alumni has established the ‘VEF Academy and Consulting’ as a vehicle for VEF alumni to teach and contribute to the advancement of education development in Vietnam. This Consulting Group has included leadership training as one of its practices.

Besides the group impact, on the individual level, VEF alumni are more effective in communicating their message to a large audience. For example, Dr. Nguyen Thanh Tuan, a public health specialist who is promoting breastfeeding in Asia, confessed that before the training he didn’t like to talk about himself and his work. But after the training, he was able to use his story to inspire hundreds of people to join his cause. His presentations have energized the audience and moved them to take action. Furthermore, several VEF alumni have started to teach Public Narrative and Organizing at their universities in Vietnam. Another alumnus believes that Public Narrative contributed to her winning first prize in an international thesis competition.

Moreover, the Public Narrative training workshops provided a meaningful shared experience for the thirteen cohorts of Fellows to strengthen relationships with each other at a critical time as VEF was sunsetting (ending as planned). Through these trainings, VEF alumni recognized that they have similar experiences and values. For example, one alumnus reflected that prior to the training “the feeling that I belonged to the VEF community had been superficial. But the training has revived a sense of VEF community like the good old days when I first received the fellowship.”

After conducting sixteen Public Narrative workshops, I experienced and witnessed the power of this pedagogy. In a two-and-a-half-day training, almost all of our participants gained new knowledge and skills and at the same time developed deep connections with other group members. In addition, the training inspired them to ask new questions and reinvigorate their life purpose. In other words, the Public Narrative training gave them hope.

One of the reasons that this training worked for VEF fellows is that they had gone through eighteen to twenty years of schooling but had not had the opportunity to learn how to tell an effective leadership story. In this workshop, they learned an approach to how to tell a story. This approach is simple and without a lot of memorization. Unlike a public speaking class where they had to remember numerous techniques such as how to project your voice, stand up straight, and pause, Public Narrative training is about changing the approach of connecting with people.

In this new approach, VEF fellows learned the essential elements of Public Narrative. They realized that they can connect with people by describing a short scene that has specific details and imagery that allow listeners to experience the feelings. Although stories are unique, there are universal feelings such as fear, anger, joy, sadness, and apathy. By tapping into these feelings and experience of whoever in a group or in the audience, VEF fellows know that they would be able to connect with the audience.

For VEF fellows, they now understand how they could include Public Narrative elements in their speeches. For example, one of the fellows used the elements in his speech. He described as a child his family was too poor to buy him a toy “remote control car.” As a result, he decided to build one himself with the help of his father. For months, he couldn’t get the car to move, but he didn’t give up. One day when the car started to inch forward, he screamed so loud that everyone in the neighborhood could hear his excitement. Because of this experience, he has devoted his life to teaching electrical engineering to young people. This fellow understood the Public Narrative elements and how he could use it to motivate his students.

The reason that Public Narrative training works is because the participants went out and tested it. They know that their new approach works because they are getting positive responses after their speech. One fellow shared that she got a louder applaud than ever before. Other fellows started to notice that the audience leaned in a bit more when they are speaking.

Furthermore, their audience is now waiting to talk with them after their speech. All these positive changes showed that Public Narrative is an effective way of communicating with people. 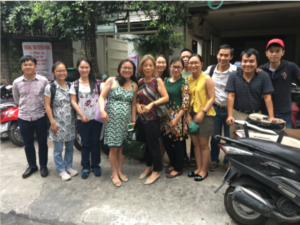 Moreover, many VEF fellows had started to share the Public Narrative approach with their staff, students, and friends. The beauty of this pedagogy is that it’s easy to remember and understand. In two and half days, one can take the materials and host a discussion with a group of people.

This project provided a new and necessary tool for our fellows as they are working on multiple and complex challenges in both Vietnam and the United States as well as throughout the world. Although VEF has now ended, the Public Narrative project will continue as a result of our Fellows’ passion to make positive changes using this framework.