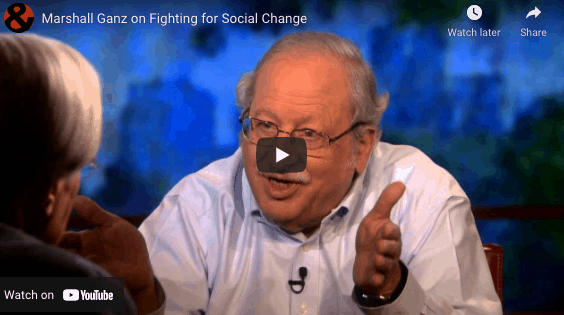 Interview between Marshall Ganz and Bill Moyers. They discuss the power of social movements to effect meaningful social change.

Bill’s guest, veteran activist and organizer Marshall Ganz, joins Bill to discuss the power of social movements to effect meaningful social change. A social movement legend who dropped out of Harvard to volunteer during Mississippi’s Freedom Summer of 1964, Ganz then joined forces with Cesar Chavez of the United Farmworkers, protecting workers who picked crops for pennies in California. Ganz also had a pivotal role organizing students and volunteers for Barack Obama’s historic 2008 presidential campaign. Now 70, he’s still organizing across the United States and the Middle East, and back at Harvard, teaching students from around the world about what it takes to beat Goliath.

One of Ganz’s themes is the crucial role narrative plays in social movements.

I think it’s particularly important because doing the kind of work that movements do requires risk-taking, uncertainty, going up against the odds. And that takes a lot of hope,” Ganz tells Bill. “And so where do you go for hopefulness? Where do you go for courage? You go to those moral resources that are found within narratives and within identity work and within traditions.