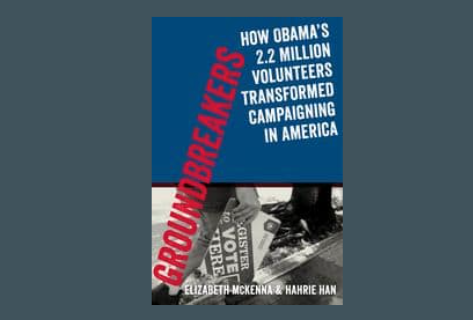 The story of how Obama for America organized 2.2 million volunteers and how they did it by Elizabeth McKenna, Jeremy Bird and Hahrie Han.

“Missing from most accounts of the 2008 and 2012 campaigns to elect Barack Obama president is the story of how Obama for America organized 2.2 million volunteers into a grassroots army. Unlike many previous field campaigns that drew their power from staff, consultants, and paid canvassers, the Obama campaign’s capacity came from unpaid local citizens who took responsibility for organizing their own neighborhoods months—and even years—in advance of Election Day. This book describes how they did it. In a time of increasing cynicism about politics, how did the Obama campaign organize so many volunteers to produce so much valuable work for the campaign? Groundbreakers tells the story from the perspective of the grassroots volunteers and campaign insiders. Using data from over 70 in-depth interviews, 100 internal campaign documents, and months of participant observation, this book demonstrates how the Obama ground game was transformative in two regards. First, the campaign piloted and scaled an alternative model of field campaigning that built the power of communities as it organized them for an election. Second, the Obama campaign had a transformative effect on the individuals who were a part of it.