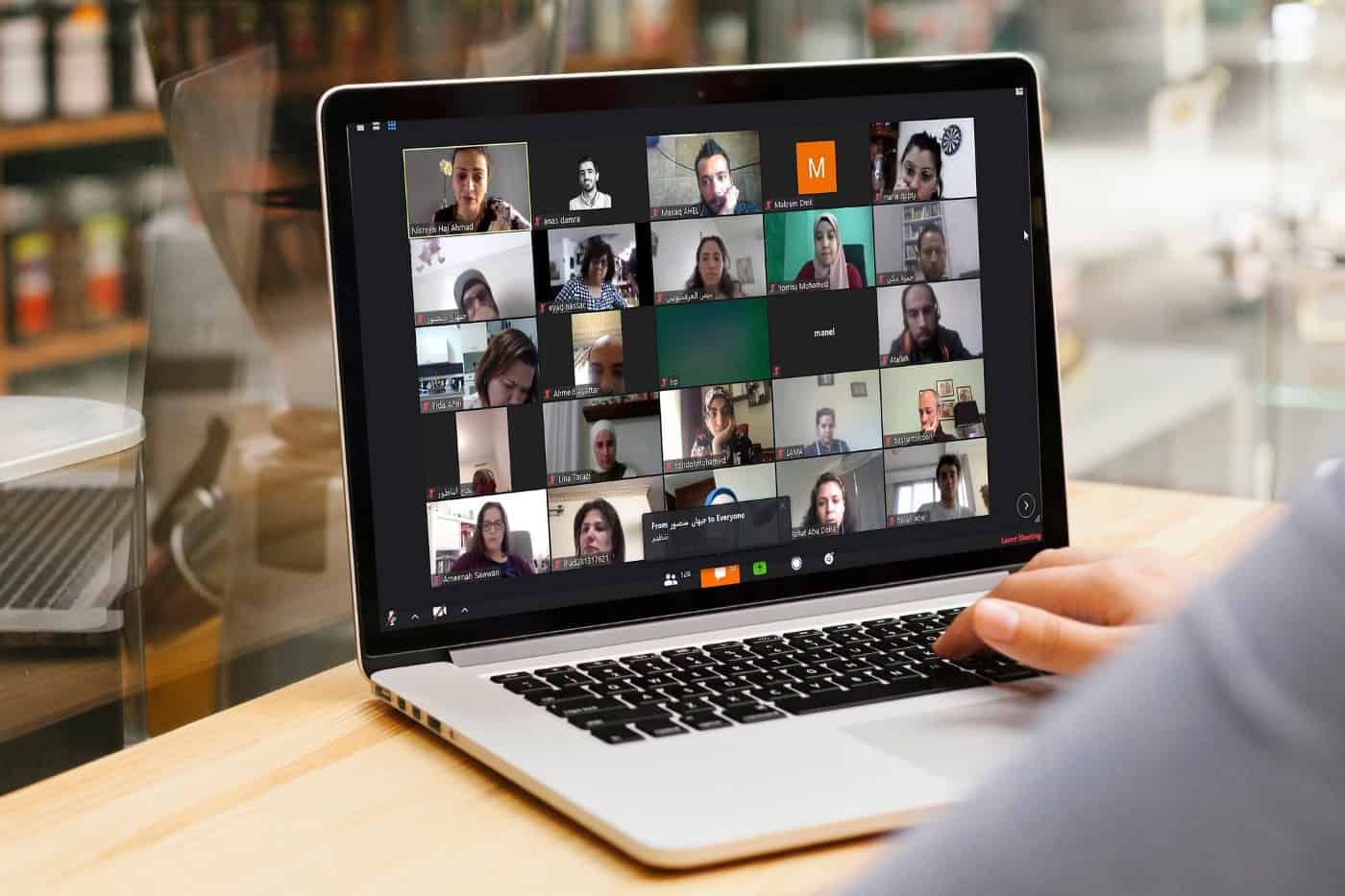 In just two years over 100 Arab organizers and leaders have graduated from Ahel’s online leadership and organizing course, where they have learned together, collaborated together and built bonds as if there were no borders in the region.

In just two years over 100 Arab organizers and leaders have graduated from Ahel’s online leadership and organizing course, where they have learned together, collaborated together and built bonds as if there were no borders in the region.

The flagship course delivered in Arabic builds the capacity of civic leaders to lead campaigns and build organization in the region, with over 71 civic leaders and 62 campaigns participating from 13 Arab countries in 2020.

This year was a bit different from the last, with the program facing the challenge of the global coronavirus pandemic which forced students to adapt their campaign strategies on the ground to respond to the moment.

LCN’s James Sleep sat down with Ahel’s Co-Founder and course leader Mais Irqsusi to learn about Ahel, its vision behind the course for building new leadership in the region, and how students sustained their leadership in the midst of COVID-19.

This interview has been edited.

James — Mais, congratulations on another successful year of the course. Could you tell us more about Ahel and how it was born?

Mais — Ahel’s mission is to support people, communities, and organizations in the Arab world to build leadership capacity. The kind of leadership capacity that can develop grassroot campaigns and movements for social and political change towards freedom, equality, and justice. We do this by introducing and coaching leaders in community organizing, shared distributed leadership and collective action.

That campaign was the Six Minutes Campaign which organized the people of Jabal Al Natheef, an urban community in Amman of 54,000, many of whom were Palestinian refugees, to encourage families to commit to reading for six minutes each day.

We were incredibly inspired by that campaign and learned so much in one year about how we could adapt the pedagogy and support communities in our region to lead change themselves.

2011 was the year of revolutions and there was a lot happening. Across the region people were demanding their civil and political rights.

After our work on the Six Minutes Campaign we went to Tunisia to support electoral campaigns after the revolution. It was an inspiring experience, working with campaigns that could now openly canvass in the streets for the upcoming elections.

As the Arab Spring proved unsuccessful in building the power needed for sustainable change in much of the region, it became evident that campaigns and their leaders needed support to build their leadership capacity to organize for change.

After Tunisia, we began to receive many requests from campaigns across the region. It was clear there was an appetite and an urgent need to people with the tools to organize for change.

Inspired by this, Nisreen and I decided to commit to take this work to the next level by launching Ahel.

James — What impact is Ahel hoping to achieve in the region and how does your flagship leadership course help achieve this?

Mais — The vision in launching Ahel is for the empowerment I saw in the eyes of the people in Jabal Al Natheef to be realized by citizens everywhere in our region.

It’s the feeling that they have the ability to change themselves through the experience of citizenship.

Through launching this course, and in all of Ahel’s work, our role is to walk alongside these communities, with minimum facilitation, to enable them to have the power to change their own lives.

One realization we had early on is that in order to really build power in the region we needed to walk a journey alongside campaigns through coaching them, not just by delivering one-off trainings where we didn’t know if the tools would be applied after the course or not. That’s why we launched the online course.

Having come from a background leading the Arab Education Forum, my focus was all about mobility in the region. The concept of the online course was unique in that it also was a way of crossing the barriers of country borders and overcoming complex visa challenges, allowing us to bring people together across the region to learn together and figure out how to face common challenges in their work.

James — Can you give us a sense of how the course is structured?

Mais — In the first year it was a pilot and we accepted 32 students. This year, we’re in our second year, with 71 students, and in both years we had over 450 applications from across the region.

The course is all online, with seven modules covering the pedagogy developed by Marshall Ganz and his associates. It covered Public Narrative storytelling, relationship building, structure, strategy and action.

Using Zoom, a lecture was held weekly on a Saturday and then a section (small group work) on a Wednesday or Thursday, followed by assignments, which are skill practice-based or reflection papers.

James — You launched the course at the time the global pandemic was beginning to impact the region. How did you adapt and how did students adapt their leadership to respond to this challenge?

Mais — The challenge of COVID-19 was a big one. COVID brought many challenges for our students.

Once the pandemic began, we sent out a listening questionnaire to understand how people were coping with this challenge. Many of our students lost their jobs, and others had to wear masks and travel to places where they could get access to internet to attend our classes.

In the end, we didn’t change anything from the curriculum, in terms of lectures or assignments; however, our approach as a teaching team included supporting students and their campaigns to adapt to the moment and continue their campaigning work.

Many campaigns shifted their focus into health organizing in their neighbourhoods, similar to the idea of mutual aid. For example, one campaign that was originally advocating to municipality leaders shifted their focus to directly supporting their communities with health and food needs.

We learned also to be flexible. Access to the internet was a challenge, particularly for those in Iraq, Yemen, Sudan, Libya and Mauritania. Many of these leaders are in war zones, particularly those in Libya and Iraq. A key learning from this was the importance of providing an internet stipend to allow students to get internet directly to their homes if they could, without being burdened by the cost.

Positively though, despite the challenges of COVID, students sustained their participation through the pandemic and graduated.

James —You had 71 participants, across 13 Arab countries, can you share a bit about the campaigns, their constituencies and what change they are seeking on the ground?

Mais — There were so many campaigns, some were political and some were social.

We had two interesting campaigns working to combat slavery in Mauritania. One of these is campaigning with communities which until three years ago were enslaved and until now do not have ID cards. This meant they weren’t able to receive access to basic needs like education and health.

Another interesting campaign is in Syria, called Families for Freedom. The campaign is seeking to free detainees from prison in Syria, not only by the Government, but also by ISIS and other militia groups, who are holding political prisoners. Families for Freedom is more like a movement with teams across the globe, since those Syrian families of detainees are living in Europe, Turkey and different countries in the Arab world. So working with a campaign that has such complex structure was an important learning for all. During COVID they launched an online petition that reached 13,000 signatures requesting to release detainees.

In Jordan, we worked with a campaign against anti-bullying in schools. It worked on organizing 9th and 10th grade students to end online and offline bullying among their peers. It is called Rewire It, as in to rewire your brain connections to have empathy and be supportive. They succeeded in getting 150 commitments to the campaign values among other students. And through that they built the capacity of 25 students who were part of the leadership team structure.

In Morocco, we worked with a campaign which succeeded in creating a coalition of organizations against early marriage. Together they created a petition of 5000 signatures to advocate for a change of law that was delivered to the Prime Minister. Another campaign in Morocco also to support LGBTQ+ rights.

In Egypt, we worked with several campaigns in the course that are focused on building community power and education through ‘power with’ campaigns focused on underprivileged areas.

Several labour rights campaigns across the region have achieved success, for example the private teachers campaign in Jordan who succeeded in fixing some of the violations to their pay rights that happened during Covid 19.

That’s just a few, with many more!

James: What is the value of this course within Ahel’s strategy?

Mais — This course creates an ability for Ahel to reach a larger audience across the Arab world through online learning. Even in countries which we work in, the course was accessible to rural villages and cities as well as people with disability. So it gave us the ability to teach leadership and organizing at a wider scope.

On a strategic level this year we focused on recruiting teams, so that participants leaving the course are not alone in introducing shared leadership and organizing in their campaigns, but are rather doing that with one or two or three more colleagues who also attended the course and are familiar with the philosophy and terminology, thus hopefully creating greater impact on the campaigns.

Last but not least, this course is an opportunity of partnership with organizations. Several local and international humanitarian organizations offered scholarships to their members in our course through covering their tuition fees. This enables long term investment in organizing.

It is important to note that though this course is extremely valuable for us, it represents a step in a pathway of leadership development that we build with our organizers. We know some might feel fulfilled by this course and continue their engagement with us and make others thirsty for even more learning. Thus we have set up Athar, the Arab Organizers Network and several more advanced learning journeys to put those activists on better pathways to face all the uncertainty of campaigning like coaching clinics and the training of coaches, to make sure we have stories to tell about winning.

James — Author Arundhati Roy wrote that the pandemic presents an opportunity to move through a portal to a new world. How can our communities seize this moment right now?

Mais — I think organizing has lots of answers for the world right now. Everything becomes possible once you learn how to tell your story, how to build relationships, how to put a team together and how to implement a strong strategy with effective tactics!

Next it’s about getting on the bike, trying, failing and getting back up again. A constant journey of learning. That of course takes courage, and once you’ve learned the tools to organize, sometimes you just need a community who can check on how you are going and support you along your journey.

One thing I’m really proud of is that the students in our course have become a community, using WhatsApp and Facebook groups to support each other and their campaigns.

In the context of the Arab world, those connections among activists are really crucial. We share a common language, and there’s tremendous opportunity to learn from the successes and failures of each other and build on that.