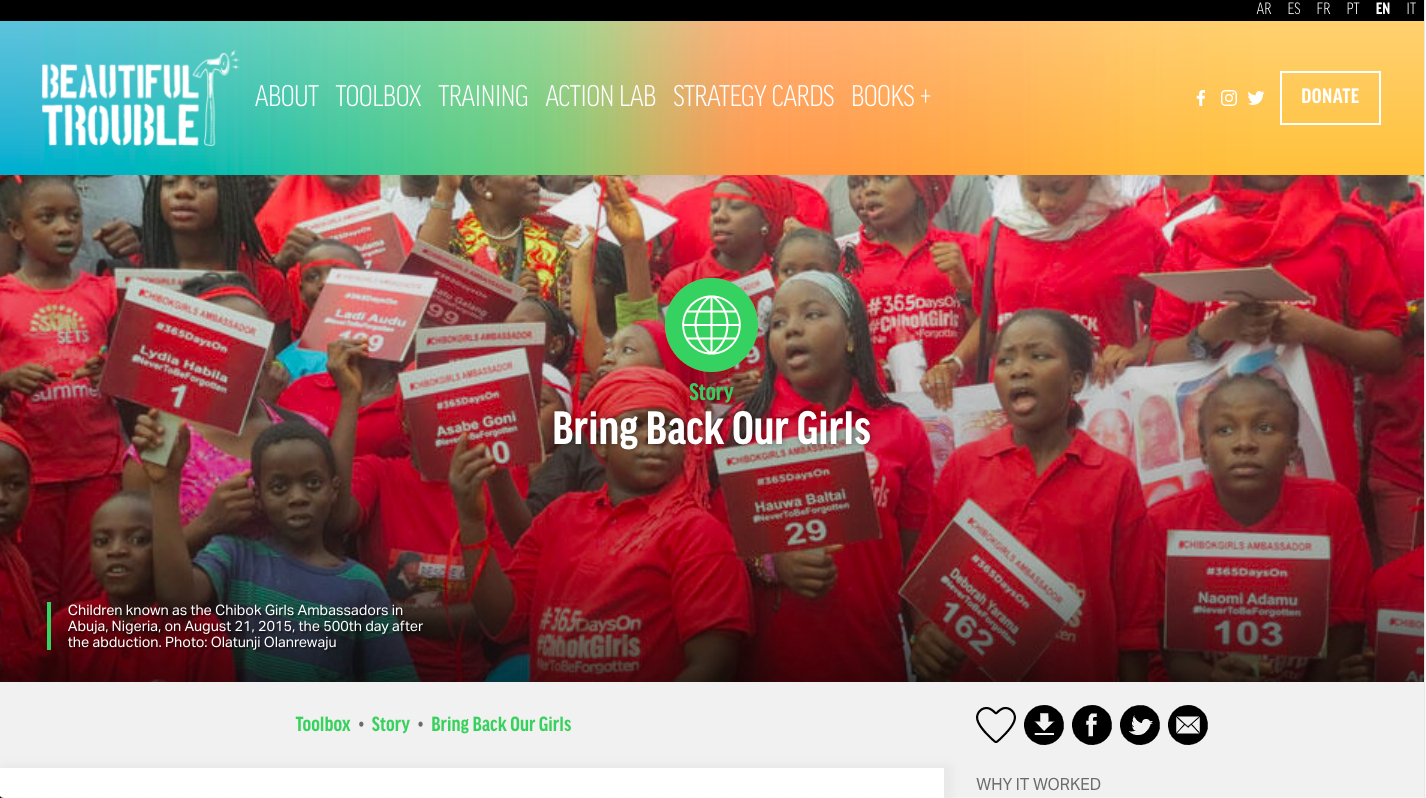 Bring Back Our Girls (Case Study) (Available in Multiple Languages)

Olatunji Olanrewaju, one of the leaders behind the campaign demanding the return of 276 girls abducted by Boko Haram, tells the story of the campaign and reflects on lessons learnt. This case study was published as part of the Beautiful Trouble toolbox for and by activists around the world.

The April 14, 2014, raid on a public secondary school in Chibok, Nigeria, by the Boko Haram terrorist group left the school razed to the ground. 276 school girls, who were preparing for an examination, were lined up at gunpoint and forced to march into trucks. 57 girls jumped off or escaped in the days that followed.

The response from the government was lethargic: The military at first denied the abduction even happened, an early claim of rescue was recanted, and a stakeholders’ meeting called by the First Lady turned emotional and rather comical at the Presidential Villa.

The campaign succeeded in transforming a long-term, unaddressed problem to an issue requiring imminent action.

The Bring Back Our Girls campaign sought to achieve a two-fold objective: stand in solidarity with the parents and affected communities, and hold the government accountable for its failure to protect its citizens by its inadequate response towards the insurgency that has embroiled the country since 2009. The abduction was the tragic peak of a wave of terror on public properties, especially schools, by the Boko Haram.

The campaign utilized both online and offline organizing. Online organizing was framed by the hashtag #BringBackOurGirls, which became viral both in Nigeria and internationally.

The online campaign started as offline activities were peaking. The first action was a march towards the National Assembly in the Nigerian capital of Abuja, organized and led by hundreds of women. Street tactics gained traction, from small community meetings to local protests, all of which gave the the hashtag even more prominence. This connected online efforts to the tactics on the ground. To bring about a more organized rhythm, regular outdoor gatherings or “sit-outs” were agreed upon and held daily in Abuja, and weekly in Lagos. Those sit-outs continue five years later, albeit with lower attendance. Nonetheless, the campaign succeeded in transforming a long-term, unaddressed problem to an issue requiring imminent action and attention by capitalizing on popular mass anger at that moment in time (see: THEORY: Al faza’a [a surge of solidarity]).

The campaign announced a call to action that empowered people to take part each from their locations and according to their capacities (see: PRINCIPLE: Create many points of entry). Suggested actions included pressuring governors and Members of Parliament, as well as symbolic solidarity actions. The call even characterized actions by location, both home and abroad. When the outrage became global, high profile people like Michelle Obama, Alicia Keys, and Angelina Jolie adopted the hashtag, while Parliaments across the world lent their voices to the demands of the movement.

From the time of the incident until April 2019, another 107 girls were successfully reunited with their parents through a combination of state-level negotiations and military force by a new presidential administration that took power in 2015.

Framing – The movement could not afford to be dragged into the cesspool of Nigerian politics, especially with an incumbent government desperate to stay in power through elections that were just around the corner. By focusing on a key, single-issue demand to “bring back the Chibok girls,” the campaign was successful in overcoming disputes around both the narrative and how the abductions would be framed.

Hashtag campaign – The use of Twitter and Facebook played a huge role in the campaign. Under a unified hashtag, those platforms were used to hold a public conversation in which specific messaging was disseminated and press statements widely circulated. Because of its virtual nature, the hashtag crossed boundaries and people all over the world paid attention to the abduction. The key elements that strengthened the use of this hashtag were that it was agreed upon collectively, formulated immediately following the incidence, and framed in line with the campaign’s demands.

The discipline and commitment, especially at the beginning of the campaign, to stick to the daily/weekly sit-outs was key. Usually, protests in Nigeria are demobilized after a single march. But the organized nature of the movement surprised an unprepared government, who would have preferred to keep the issue low-key. By keeping the abduction in the limelight, the movement sparked a global reaction which further added to the local pressure that was building up. And now, the location of the sit-outs in Abuja, “The Unity Fountain,” has been transformed into a symbolic civic space where various campaigns, labour unions, and movements hold their street actions.

The movement’s advocacy efforts also indirectly triggered a great deal of political resentment towards the Goodluck Jonathan administration, creating a shift in the political scene. During the March 2015 presidential elections, Nigerians successfully voted out an incumbent government for the first time ever.

Why it didn’t work

While the movement succeeded in pressuring the state to take serious measures and transformed the issue to one of global attention, five years after the abduction 112 girls remain captive. Critics of the movement have posited that the chances of better results would have been higher had the movement interacted with the government with less acrimony. However, it is the very bluntness of the campaign that actually pushed the new government to make progress with the insurgents, which led to the return of 107 girls.

The campaign created teams and sub-teams in order to coordinate and delegate more effectively, as well as increase capacity. One of the teams, the “Strategic Team,” who were basically responsible for fine-tuning decisions and driving engagement strategies, later become a source of division and occasional polarization because it began acting in a way that was seen to be unilateral. Unfortunately, the jurisdiction and scope of responsibilities of the team was not explicitly spelled out, leading some team members to act like an entitled board of directors.

Available in Arabic, French, Italian, and Portuguese on the Beautiful Trouble toolbox.