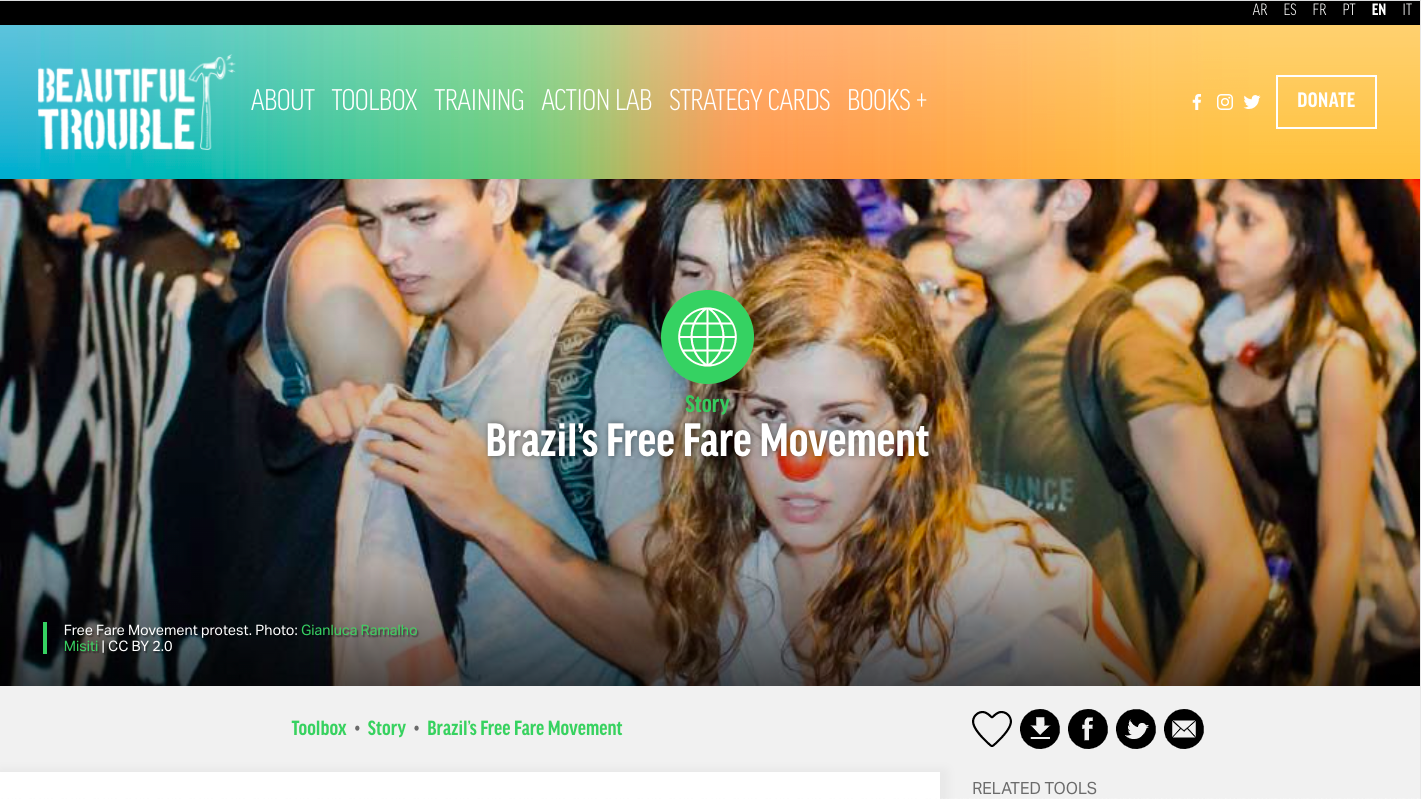 Gabi Juns and Vitor Leal tell the story of how a horizontal and autonomous movement in Brazil called the Free Fare Movement (Movimento Passe Livre) was formed to fight for free, high-quality public transportation.

Ten years ago in Brazil, a horizontal, autonomous, independent, and non-partisan movement called the Free Fare Movement (Movimento Passe Livre) was formed to fight for free, high-quality public transportation. Since then, every time a municipal government in Brazil has tried to increase public transportation fares, the Free Fare Movement has mobilized to oppose the increase and push for free public transportation. In June 2013, these protests snowballed into a mass uprising, successfully reversing a planned fare hike and awakening a generation of young activists to the power of mass demonstrations.

When São Paulo and several other Brazilian cities announced fare hikes that summer, the Free Fare Movement took to the streets. Unlike past years, when the movement held actions on a weekly basis, organizers opted for more frequent demonstrations. Every second day, at rush hour, activists occupied São Paulo’s main avenues and interrupted traffic for hours. At the end of each action, protesters would disperse chanting: “Tomorrow it will be bigger!”

Protesters and journalists started carrying vinegar with them to reduce the effects of police tear gas. The police responded by arresting anyone caught carrying vinegar, provoking widespread ridicule.

As the movement gathered steam, the police responded with repression, and the corporate media consistently portrayed protesters as vandals and hooligans, constantly running images of broken storefronts and burned buses. In contrast, social media were inundated with accounts of police violence and excessive use of tasers, pepper spray, tear gas, and rubber bullets, generating widespread support for the demonstrations.

Protesters and journalists started carrying vinegar with them to reduce the effects of police tear gas. The police responded by arresting anyone caught carrying vinegar, provoking widespread ridicule, as memes proliferated on social media celebrating “Salad Uprising,” “V for Vinegar,” “Vinegar Revolt,” and so on.

On the day of the fifth action, more than 100,000 people flooded the streets of São Paulo. The wave of protests reached a level that hadn’t been seen in Brazil since the struggle for democracy under military rule. A few days later over a million people in hundreds of cities took to the streets, marching not just for affordable public transportation, but against corruption, for better health care, and many other causes. Finally, after two weeks of near-continuous street actions, officials announced that the fare increase would be reversed.

Everyone felt the irresistible people power on the streets. The mobilization awakened a generation to the power of mass street action and the utopian possibilities inherent in a popular uprising.

Originally published in Bella Baderna (Edições Ideal, 2013), the Brazilian edition of Beautiful Trouble. Translated from the Portuguese by Gabi Juns and Christine Halvorsen.

Blockade – In order to put pressure on the city’s mayor and the governor of the state of São Paulo, the Free Fare Movement organized public actions with thousands of people disrupting traffic on the city’s main avenues. This is a common tactic in Brazil, where people occupy (see: TACTIC: Occupation) streets, sometimes closing them with burning tires, trash, and wood. The aim is to create chaos in the cities, forcing the media to cover the issue and putting one’s opponent in a decision dilemma. One common problem with this tactic is the public outcry it can provoke in defense of people’s “constitutional right to come and go,” especially from the right-wing media. But since the mass mobilization to reverse the fare increase, occupying the streets has come to be much more accepted in Brazil, regardless of the motive.

Simple rules can have grand results – At the end of every action, the Free Fare Movement would announce the next action with very simple instructions: “Next Thursday, June 13, at 5pm. City Theatre.” Nothing else needed to be said. Everyone knew exactly what it was about.

Available in Arabic, Spanish, and Portuguese on the Beautiful Trouble toolbox.