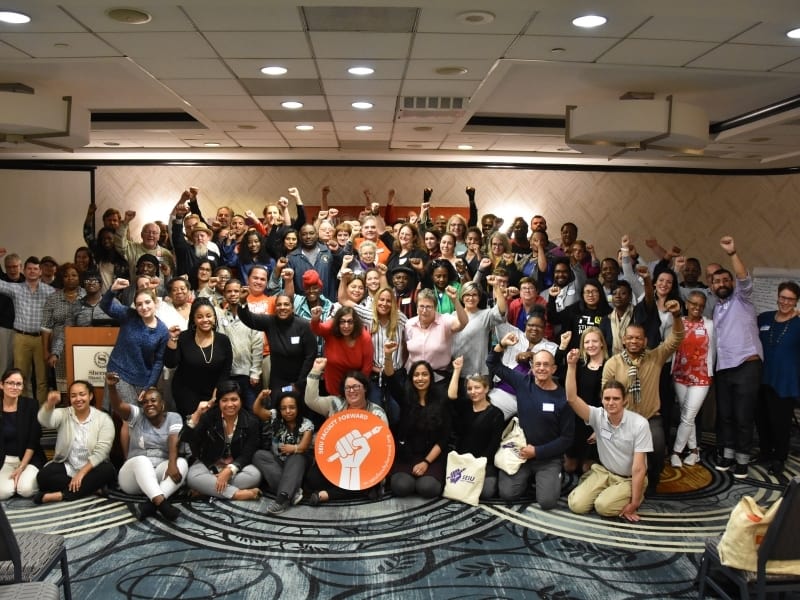 On January 10th-13th, 2019 five organizers/trainers from the Leading Change Network partnered with SEIU Florida Public Services Union, a 19,000 member union of workers in city government and educational services across the sunshine state to support the leadership development work of leaders as part of their Faculty Forward campaign.

Adjunct faculty from around the country are organizing to improve conditions in higher education institutions ranging from community colleges to 4-year colleges and universities. As states across the country have slashed funding for higher education, educators and students alike have suffered the consequences. These institutions are increasingly relying on adjunct faculty, who are generally paid less and have less job security than tenured full-time faculty, to do more and more of the teaching. Adjuncts are often paid poverty-level wages and have to cobble together classes at multiple schools to make ends meet and even then often struggle mightily to do so. At the same time, students often struggle to go to class and work jobs in order to make the necessary tuition payments to stay in school. This is happening against a backdrop in which higher education degrees as vital as ever for finding a meaningful role not just in the job market but also as a member of this country’s democratic system.

Thousands of faculty have begun to organize across Florida’s community college system to improve these conditions by forming a union with SEIU-FPSU. In order to achieve wins that endure beyond a union election at any one campus, the campaign leadership made an important decision to invest in the leadership development of those who are moving the campaign forward: the faculty themselves.

In order to get support in developing enduring leadership within the campaign, Sam Wohns, a lead organizer on the campaign who took responsibility for helping to shape the leadership development program, reached out to Jake Waxman to see how LCN’s approach might fit into the work that the campaign was doing. They determined that a good entry point for the campaign could be a Public Narrative workshop that would serve to anchor one day of a weekend leadership conference. But rather than just bring in a bunch of outside LCN affiliated coaches, Sam and Jake asked what it might look like to select 20 of the best organizers and leaders within the Faculty Forward campaign to be trained as coaches who could then coach the public narratives of the 100 leaders expected to come to the weekend. In this way, the snowflake capacity could be built on two levels and if there was excitement for more of this kind of work, there would be people with experience of the coaching process who could help lead any future efforts.

Another key strategic decision was to expand the constituency and invite key leaders from FPSU’s current membership as well as organizers and leaders from the Fight for $15/hr and a Union campaign so that people could see that their experiences, though unique, may have commonalities across different jobs. 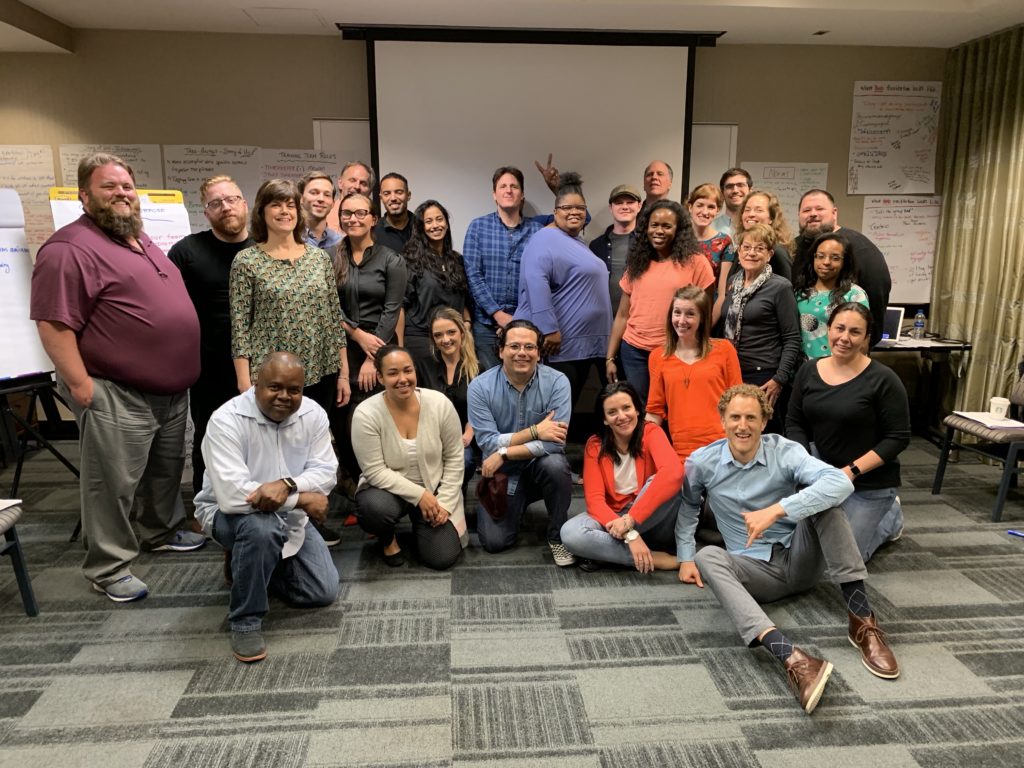 So, how you actually do this, one might ask? How do you grow from one coordinator and a lead trainer to the team of 5 trainers, 20 coaches and over 100 people trained in Public Narrative. Here is how we did it:

The preparation work started with Jake Waxman recruiting an all-star team from LCN – Ana Babovic, Dan Grandone, Abel Cano, and Anita Krishnan – to work with him as the core training team. This team met for a half day session to prepare for the work ahead. Sam meanwhile recruited 22 coaches (two extras just in case) from within SEIU, importantly engaging them in a conversation about expectations for their time and focus during the weekend.

Building on the foundation of this preparation, we had 3 full days of training.

On the first day, January 10th, the core training team (mentioned above) led a one day PN workshop with the 22 coaches in which they were participants, learning the craft as learners as a first step to becoming teachers of others. The following day, January 11th, the core training team (those five from above) led a training of trainers. In other words, this is where the 22 participants from the first day started to learn the craft of coaching narratives, of shifting from learners to teachers. This training clarified the why, what, and how of coaching each story session: Self, Us, Now, and Linking; modeled coaching tough stories; had the coaches practice coaching stories; then debriefed what they had learned as coaches. This training prepared our brand-new coaches for their role in the following day. On the last day of the training, the third day, January 12th, the core training team led upfront teaching to 100 participants who were then coached in the narrative practice by the 20 “new” coaches who had been trained the previous two days.

With these three days, the official part of the training was completed. On the fourth day, Jan 13th, the Leadership Conference made a pivot to the campaign’s next steps. On that day we spent the morning hearing 19 stories from participants who had been nominated by their coaches the day before. Those stories cemented the sense that this PN Workshop served to solidify skills, yes, but also to shift people’s perception of who they were in relation to their own leadership and to each other as the campaign forged new solidarity and new capacity to tackle the urgent challenges faced by adjunct faculty, fast food workers, and other service workers throughout the state.

The Outcome (lessons learned and impact):

The workshop was a powerful experience. To sum up the outcome, let’s look at some of the reflections participants offered: 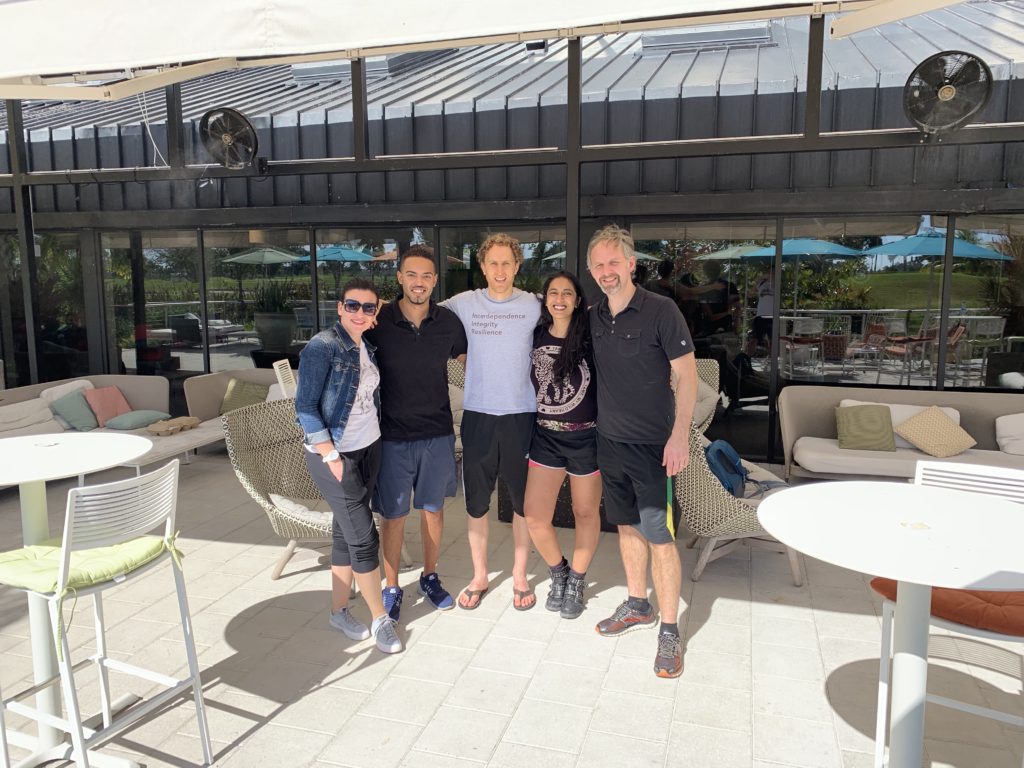 As trainers, we also learned. Here are some of the takeaways that others in the network may find helpful:

March For Our Lives