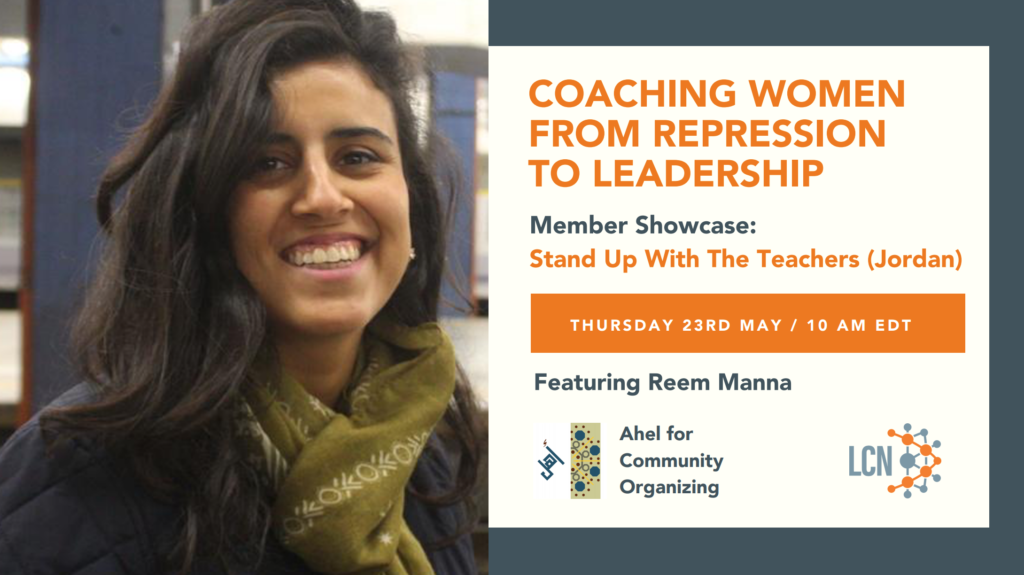 This month on Thursday 23rd of May at 10 am-11:30 am EDT, the Ahel Organization will showcase how they are training and coaching women teachers to overcome repression and lead the Stand Up with the Teachers Campaign to guarantee their labour rights in Jordan.

The experiences of women teachers in Jordan’s private schools sparked the campaign in 2015. Most paid less than minimum wage, often deprived of annual leave, coerced to resign just before summer break, losing their contracts if they are pregnant, women teachers are using community organizing and public narrative to achieve pay justice, improved conditions and a stronger education system overall. The campaign has faced the challenge of most women teachers being afraid to join, women who have become used to the repression in schools, just as they got have got used to it in their homes and in society at large.

Join Reem Mana’a from Ahel Organization, the Lead Coach on the Stand Up with the Teachers Campaign, as she shares the lessons learned from training and coaching the teachers as they lead their campaign.

Join us to hear the inspiring journey of Ahel in training and coaching the Stand with the Teachers Campaign to build the capacity of the community to take leadership in their own cause.

Tickets are free and open to all.

Register here to join us on the day.

About Reem and Ahel:

Reem Manna leads the Campaign Coaching department at Ahel. Reem has always been a stark believer of women’s power to lead change on both individual and collective levels. During university years, she volunteered in the Female Sexual Education Program and coordinated the Aids and Civic Education volunteering program. After graduating, she started her path organizing the No Honor in Crime Campaign against the disgusting phenomena of killing women relatives in the name “honor”. In 2013, Reem joined Ahel as a coach for campaigns in Palestine and Jordan either for women rights or led by a majority of women. An important example was coaching women candidates get elected in the local councils in Palestine 1948. In 2016, she took the lead role in coaching Stand Up with the teachers’ campaign and in 2017 she started leading the coaching campaigns department at Ahel. Reem is a graduate of the Harvard Leadership, Organizing and Action course by Marshall Ganz and she is a teaching fellow of the Arabic online course Leadership and Organizing for Change. She studied languages at the University of Jordan, hosted multiple radio shows, and is a talented photographer.

Ahel’s mission is to contribute to organizing collective voice and collective action for justice, equality and freedom in the Arab region. Since 2011 Ahel has coached 18 campaigns in Jordan, Palestine, Syria and Lebanon and trained more than 4000 people. It follows Marshall Ganz community organizing methodology and recently combined it with Paulo Freire’s emancipatory learning approach.